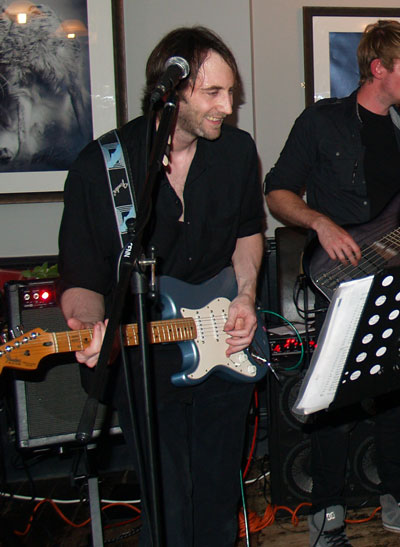 Hello! I'm Matthew, a guitarist based in Guildford, and I would like to help you learn to play the guitar.

I have been playing since I was 11 years old when I had my first guitar lessons, and after that I was mostly self-taught until I attended the Academy of Contemporary Music. My first instrument, however, was the piano which gave me a strong foundation in music theory. I grew up listening to my dad's record collection of '60s and '70s music and I'm pretty sure this is what hooked me into wanting to become musical (as well as the ThunderCats theme tune).

I learned to play guitar initially by reading along with sheet music books to my favourite albums and working out a lot of stuff by ear. The main thing I wanted to do was just be able to play the songs I liked, which I think is true of most students I meet!

As a teenager I was obsessed with classic rock like Queen, The Beatles, David Bowie and Led Zeppelin. Later I discovered more alternative rock like Pearl Jam, Radiohead, Nine Inch Nails and The Smashing Pumpkins. These days I’ve mellowed out a bit and also enjoy acoustic music like First Aid Kit and Norah Jones.

Don't tell anyone, but I quite enjoy pop and electronic music, too!

From 2007-2009 I attended the Academy of Contemporary Music (ACM) in Guildford, where I achieved a Higher National Diploma in guitar performance and received tuition from world famous musicians.

I decided to start teaching guitar in 2009 after being frustrated that some parts of my own music education were very formal, and feeling that the most vital part of learning music is having fun. Having end goals is important, but I think people should enjoy the journey towards them.

I also began playing in several rock/pop covers bands, including Return To Grace. I still play gigs regularly in and around Surrey.

In my spare time I really enjoy transcribing my favourite songs to a ridiculous level of detail, and it's become something I do to relax. I have a dream project of creating full score sheet music for every Queen song.

In 2012 I began posting lesson videos on YouTube under the name LeftHandedGuitarist, where I currently have over 40,000 subscribers.